Building a daily newsletter from 0 to 100k+ subscribers with referrals

How a referral program helped The Pour Over unlock rapid, cost-effective newsletter growth — and become one of the fastest-growing media brands in the US. 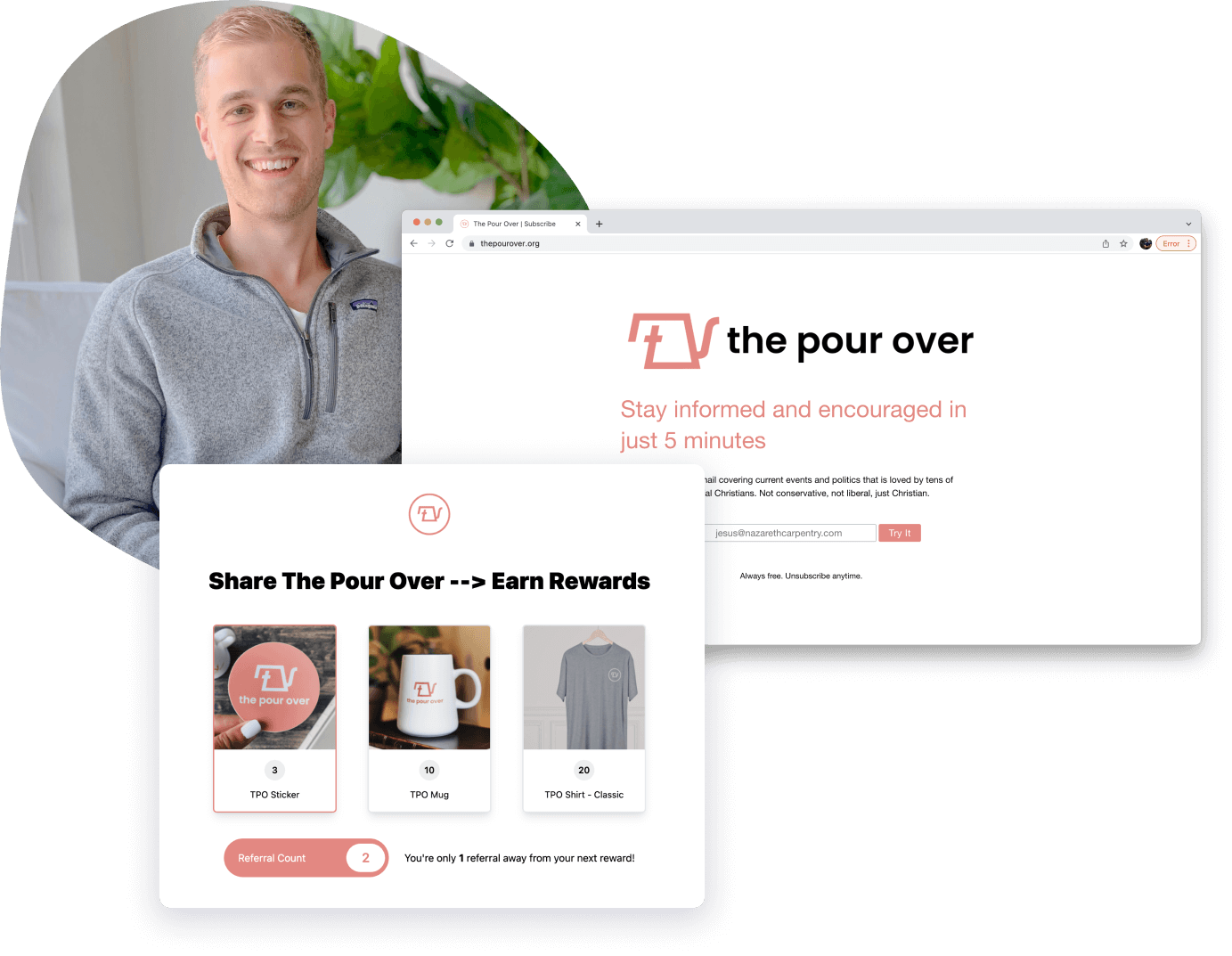 "The bottom line is - referrals are far and away the best way to grow your newsletter cost-effectively, and with quality subscribers. SparkLoop made it incredibly easy."

Founder, The Pour Over

Jason Woodruff founded The Pour Over in 2018 as a personal exercise. He had no idea that it would turn into one of the fastest-growing media brands — going from zero to over 100k subscribers in under two years.

The Pour Over is a Christian email newsletter designed to bring current events to readers’ inboxes, without the biases found in other news outlets.

As a media company that monetizes via advertising and sponsorships, consistent affordable audience growth is key to The Pour Over’s success.

For the first year, The Pour Over grew solely by good ol’ fashioned hard work. No ad spend, no referrals, just Jason and his small crew spreading the word to family and friends.

After the first year of slow, grueling growth, they began to expand their strategy to include paid ads on Facebook. This led to so-so results. With the rising costs of ads, the cost-per-subscriber was too high and only getting worse.

They needed to find an acquisition channel for high-quality subscribers — but on a strict budget and with only a small team.

Jason had seen other newsletters like Morning Brew grow successfully through referrals. But would referrals work for his newsletter’ too?

“At the beginning, we shamelessly copied successful newsletters like Morning Brew and The Skimm in almost every way, but the one thing we couldn't seem to replicate was their referral program. I can’t tell you how many times I scoured google trying to find out how to manage referrals like them.”

Jason decided it was worth it to try a referral program for the Pour Over, so he began by designing a reward structure, modeling it after (you guessed it) Morning Brew.

With the reward strategy in place, now it was time to implement the program in the newsletter. But how?

For their first attempt, the Pour Over team turned to a generic referral tool to power their newsletter — a big mistake, according to Jason:

“Our first referral tool was clearly not designed for newsletters. I was spending 3x more per month on my referral software than my ESP, which is literally the core of my business. I was paying for a bunch of features I didn’t need, and it was really clunky and difficult to get it to do what I needed it to do.”

Hundreds of hours and countless dollars later, Jason was fighting an uphill battle. He knew he needed to make a change — and turned to SparkLoop.

For the Pour Over team, choosing SparkLoop to power their referral program just made sense:

Jason contacted the SparkLoop team for a concierge migration and — just a few hours later — they were ready to start growing.

It's common for newsletter referral programs to take 2-3 months to find the right combination of rewards for fast growth. But the Pour Over were lucky from day one.

Almost immediately, the referral program shifted their subscriber growth to the next level.

“It’s amazing what referrals can do for your growth. Even if you don’t have rewards, the simple act of asking your audience for referrals and giving them a mechanism to do so gives you a boost. There’s something about seeing their referral count tick up that lights something up in people… Of course the rewards just boost growth even further.”

This allows Pour Over subscribers to enter a prize draw by making referrals, with the prizes sponsored by the Pour Over's advertisers.

The result? More revenue and faster growth at no cost for the Pour Over, better results for advertisers. Win-win...

“We run a lot of referral giveaways for advertisers. Several times a month we’ll have a giveaway for books or coffee or apparel or anything else our advertisers want to promote. It provides clicks and exposure for them, and revenue and referrals for us.”

Since switching to SparkLoop, The Pour Over team's life has gotten easier, the cost of subscriber acquisition has been reduced, and referrals continue to pour in.

In under 12 months, the active email-subscriber base has grown from 20k to well over 100k subscribers.

Jason says that if they stopped all promotion aside from referrals, they’d still continue to grow by several thousand subscribers every month.

SparkLoop has made it a no-brainer to continue to build out and invest in the referral strategy. According to Jason, this is because it’s incredibly easy to make changes to the rewards, offer new giveaways, and try new images and copy within their emails to test out what’s working and refine the strategy accordingly.

“The bottom line is - referrals are far and away the best way to grow your newsletter in a cost-effective way, and with quality subscribers. SparkLoop made it incredibly easy to set up a Morning Brew-style referral program that does exactly what we need it to do, at a fraction of the effort and cost of the generic solution we used before.”

The best media brands and newsletter publishers use a SparkLoop referral program to grow 20-200% faster.

Learn how to come up with a reward strategy that's perfect for your audience in our free Referral University course... 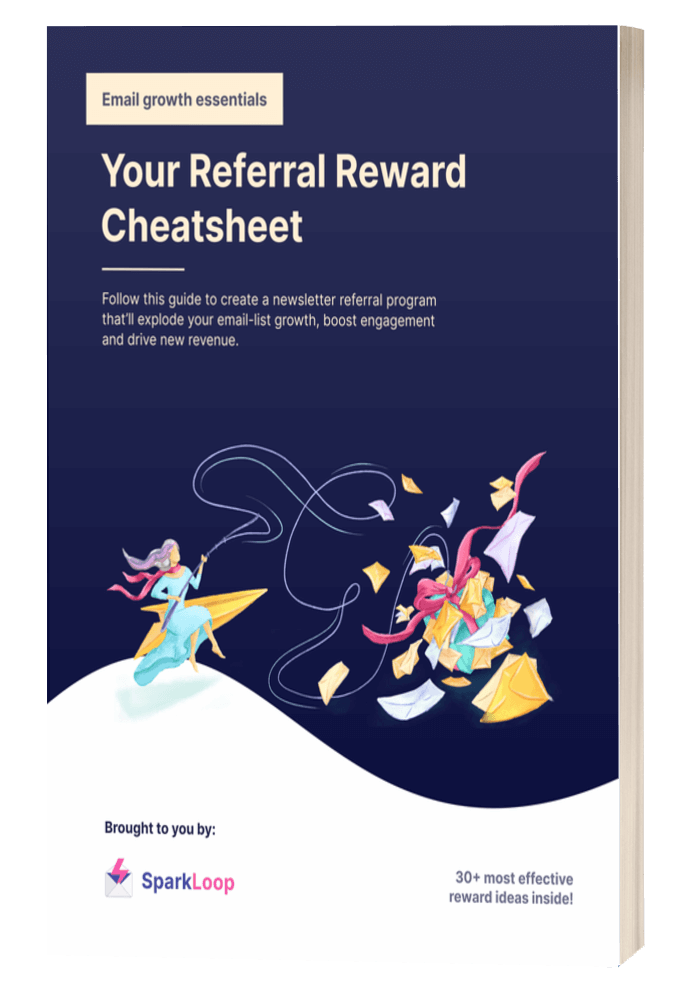 Four tips you can steal to grow your own newsletter:

Many of the top media brands and newsletter publishers are following the same blueprint to boost their subscriber acquisition — and you can too.

Here are some key takeaways worth implementing yourself...

The key to fast referral growth is choosing the right rewards for your audience.

“It’s important to consider the value of each new subscriber when setting up your reward tiers. For instance, the mug is costly for us to ship, so we need a considerable amount of referrals for it to be worth it. On the other hand, if it’s too high, readers will be discouraged because the reward feels out of reach or not worth the effort.”

For inspiration, check out our Rewards Cheatsheet with 30+ examples for every type of newsletter.

Sponsored referral giveaways are one of the best-kept secrets for faster newsletter growth. Used by the best performing media brands in the world — from the Pour Over to Morning Brew and The Hustle.

Not only do they boost referral growth at no extra cost, but they allow you to unlock better results for advertisers (and, ultimately, more sponsorship revenue).

Intrigued? Here's a deep-dive we put together, featuring Ben and Katy from MadRev (previously leading sales at The Hustle)...

3. Go all-in on sponsoring other newsletters

On top of the referral program, the Pour Over has also taken advantage of SparkLoop’s Magic Links feature to unlock fast growth by sponsoring other newsletters.

With Magic, subscribers of other newsletters can join your email-list with just one-click from inside their inbox. This removes friction and results in significantly better performance. Often up to 2x more conversions per newsletter ad.

“We have literally shifted our growth strategy to focus more on utilizing the Magic Links with partner newsletters. First of all, it’s insanely easy to set up, and we’ve seen our ads using Magic Links be 40% more effective than when we send readers to a sign up page.”

You can grab your own Magic Link for free, here.

4. Get help from the experts

Growing your newsletter can be a challenge. Especially when it comes to setting up a referral program for the very first time.

That's why newsletter publishers — like the Pour Over — get significantly better results when they opt for a free strategy call with one of our SparkLoop growth strategists.

If you're looking to ramp up your email-list growth this year, book in a call today and discover what's working for other, similar newsletters.

Launch your own referral program in minutes...

Perfect for the largest email-lists on the internet